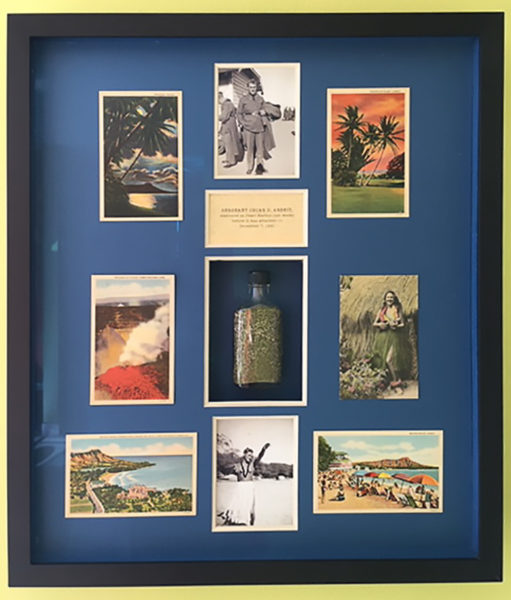 As custom framers, we not only get to work with beautiful art that our customers bring in for framing, but we also have the honor to work on pieces that deeply meaningful for the client.

Wendy Arbeit and her husband Bob winter in Panama at the Country Club Towers on Coronado’s Playa Serena. Wendy wanted to surprise Bob with a framed compilation of a part of his father’s history. It was to be a special gift for his birthday

Bob had a strong bond with his father, who carried with him the troubled history of European Jewry through World War I and II. Bob’s father, Oscar O. Arbeit was born in 1907 in what was then the Austro-Hungarian Empire, which consisted of Austria, Hungry and parts of what are now the Ukraine and Poland. Oscar was 7 years old when World War I began. At that time he and his family moved to Vienna, Austria. Oscar’s father was in the Austrian cavalry and fought in World War I. When the war ended, the Austro-Hungarian Empire was dissolved and the family remained in Vienna. In 1938, Austria was annexed by Nazi Germany. In 1939, just a few months before the start of World War II, Oscar managed to secure a green card and went to New York. Not all of Oscar’s brothers and sisters would be as fortunate. On arriving in the United States of America, Oscar immediately joined the army. That same year, he was stationed in the Pacific at Pearl Harbor in Hawaii. Oscar spent a year in Hawaii and was shipped back to the United States 3 days before the attack on Pearl Harbor took place. After the U.S. entered the war, Oscar spent the next four years in the army in the Pacific theater. After the war, he returned to New York, married, had two sons and ran, alongside his younger brother, a successful fur business. He died in 1988.

Fast forward to 2018. Wendy Arbeit, Bob’s wife, came into Coronado Frame with a bag of memorabilia from Oscar’s time in Pearl Harbor. Wendy wanted to frame a number of the items as a surprise for Bob and to honor a piece of history that tells that part of the family story. She didn’t know exactly how it would all work. After some discussion, discussion we decided on the items that would go into the frame. There were several colorful postcards to choose from, photographs of Oscar’s life in the army, and a bottle of black flaked volcanic sand that Oscar had collected from the Pearl Harbor beach. Next we discussed mat board and moulding and the team at Coronado Frame got to work designing and creating the shadow box.

Bob was deeply moved when Wendy presented him with the frame that encased a piece of his father’s history. Weeks later, when I asked Bob how he felt when he saw the frame, his eyes welled up and all he could manage to say was, “I loved my father”.

Custom framing is a labor of love and for me, it is stories like this that make it all worthwhile. We love framing pieces that are meaningful to you. We love framing the items that bring you joy, add value to your life and beautify your home. We know that you love what you bring in to frame. We want you to know that we work with love on the pieces you entrust us.

Thank you for your business, Wendy and Bob Arbeit!