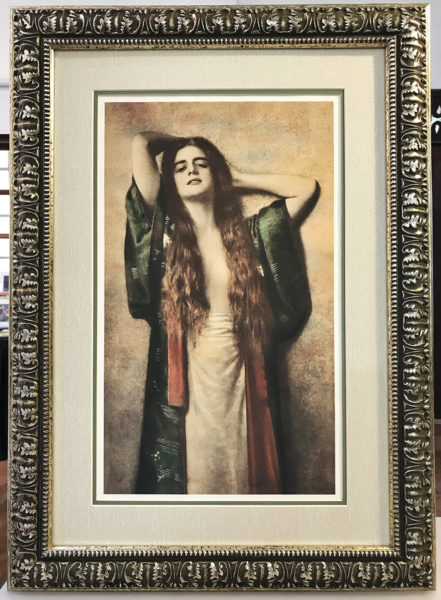 When Kaye Ashbridge moved to Panama in 2005, there was tube in the shipping container, with a poster in it. The poster had been in Kaye’s family for many years. The family referred to the woman in the poster as ‘Aunt Maude’. She was thought to be a Great Aunt to Kaye’s Mother. However, as the family has no records of her birth or death, and thereto known descendants, she may have been a friend who was thought of as a sister. She was however important to the family, as stories of her were passed down through the generations. Kaye and her siblings got a glimpse of the eccentric and enigmatic relative through those stories.

Aunt Maude probably lived in the late 1800s to the early 1900’s. They said she was an adventurer and travelled the world. Stories had her traveling with gypsies in England and also in Australia. They say she made her living reading tarot cards and gained notoriety through her reading skills. People close to her said she ‘didn’t drink, but smoked like a chimney. Aunt Maude apparently came to the United States as a mail order bride. While we don’t know where her marriage led her, they say she last worked as a Madame in a brothel that discreetly serviced the upper class.
Kaye’s family had colorized 5 x 7 photo of Aunt Maude, which they turned into poster size. Each member of the family receives a copy of Aunt Maude, when they get their first home.

When Kaye and Jerry moved to a new home in Pedasi, they decided to pull Aunt Maude out of her poster tube and give her a place. I asked Kaye what having the photo of Aunt Maude means to her, she said, “It represents the freedom of the female spirit, unhampered by social constraints”. 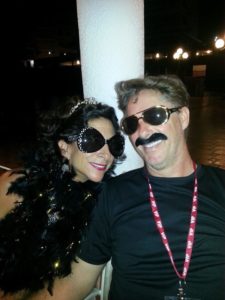 Hey Kaye! I can see Aunt Maude’s spirit in you! I want to emulate her too! Can I have a copy of that photo?

When Kaye brought Aunt Maude in for framing, we choose a classic ornate moulding that would help place her in a time period. A cream colored fabric textured mat was used as the upper mat, to bring the feeling of the background texture forward. A hint of green was used as the inside mat to reference the green in Aunt Maude’s robe. The piece was finished with conservation glass to keep from fading over time.